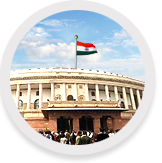 Parliament is the supreme legislative body of India. The Indian Parliament comprises of the President and the two Houses - Rajya Sabha (Council of States) and Lok Sabha (House of the People). The President has the power to summon and prorogue either House of Parliament or to dissolve Lok Sabha. The Constitution of India came into force on January 26, 1950. The first general elections under the new Constitution were held during the year 1951-52 and the first elected Parliament came into existence in April, 1952.