India has achieved high enrolment rates for girls at primary and upper primary levels of schooling. However, at the secondary level girls' enrolment remains low. Pockets of low performance persist across the country in many states. That all girls are not in school yet, is amply reflected in the low rural female literacy rates, the prevalence of Special Focus Districts (SFD) and Educationally Backward Blocks (EBB), low attendance rates and the number and proportion of out of school girls. What the data reveals about girls' needs further analysis to identify the bottlenecks for targeted planning, for effective implementation and monitoring.

In this scenario, a Gender Atlas for the country has been developed to highlight the issues, geographies and social background of girls that are still a concern and require urgent attention. The Gender Atlas is based on existing data and highlights problem areas to serve as pointers for intervention priorities. It is seen as a management tool that can focus on 'demand' and 'supply' side issues alike that impinge on girls' education.

Objectives of the Atlas 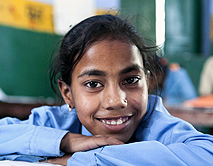 The Atlas is designed around the two broad areas of performance of girls' education and vulnerabilities visualized in the following five sections:

Comparative Composite Index based Quartile Ranking grouped under categories of access, infrastructure, teachers and outcome indicators and based on 25 indicators pertaining to primary, upper primary and secondary level which can be visualized at State, district and block level.

Vulnerability status of an area based on a composite index of 3 broad indicators (i) rural female literacy (ii) percentage girls/boys married below the legal age of marriage and (iii) working children can be visualized. Separate visualisations are given for working children for the following sub-indicators: disaggregation by gender and age for the 5-9 years, 10-14 years and 15-19 years age groups as well as for marriage below the legal age. These maps are available up to the district level.

Children with Disabilities: The performance status of six individual indicators can be visualized at state and district level across three years i.e. 2011-12, 2012-13 and 2013-14.