There is no country like India, quite as diverse, multi-lingual and multi-cultural, yet bound together by the ancient bounds of shared traditions, culture and values. Such bonds need to be strengthened through enhanced and continuous mutual interaction between people of varied regions and ways of life so that it encourages reciprocity and secures an enriched value system of unity amongst people of different States in a culturally special country like INDIA. Ek Bharat Shreshtha Bharat was announced by Hon'ble Prime Minister on 31st October, 2015 on the occasion of the 140th birth anniversary of Sardar Vallabhbhai Patel. Subsequently, the Finance Minister announced the initiative in his Budget Speech for 2016-17. Through this innovative measure, the knowledge of the culture, traditions and practices of different states & UTs will lead to an enhanced understanding and bonding between the states, thereby strengthening the unity and integrity of India.

The Ek Bharat Shrestha Bharat programme, aims to actively enhance interaction between people of diverse cultures living in different States and UTs in India, with the objective of promoting greater mutual understanding amongst them. As per the programme, each year, every State/UT would be paired with another State/UT in India for reciprocal interaction between the people. It is envisaged through this exchange, that the knowledge of the language, culture, traditions and practices of different states will lead to an enhanced understanding and bonding between one another, thereby strengthening the unity and integrity of India.

The States and UTs are to embark on a mission to enhance their cultural, academic and economic ties by entering into a wide range of mutual engagements with the paired States/UTs covering the spheres of music, drama, cuisine, language, history, tourism and other forms of exchange between the people. An indicative list of activities has been drawn up and circulated to the State Governments / UT Administrations and to the key Central Ministries. The States/ UTs may choose, evolve and develop their interaction pattern based on the suggested list as per operational suitability in the course of their interactions.

All States and UTs will be covered under the programme. There will be pairing of States/UTs at national level and these pairings will be in effect for one year, or till the next round of pairings. The State/UT level pairings would be utilized for state level activities. District level pairings would be independent of the State level pairings. The activity will be very useful to link various States and Districts in annual programmes that will connect people through exchanges in areas of culture, tourism, language, education trade etc. and citizens will be able to experience the cultural diversity of a much larger number of States/UTs while realising that India is one. 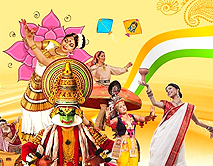