The Ministry of Rural Development (MRD) launched the Shyama Prasad Mukherji Rurban Mission (SPMRM) in 2016, to implement the vision of "Development of a cluster of villages that preserve and nurture the essence of rural community life with focus on equity and inclusiveness without compromising with the facilities perceived to be essentially urban in nature, thus creating a cluster of "Rurban Villages". A 'Rurban cluster' is a cluster of geographically contiguous villages with a population of about 25000 to 50000 in plain and coastal areas and with a population of 5000 to 15000 in desert, hilly or tribal areas.

The aim for the mission has been to develop rural areas by provisioning of economic, social and physical infrastructure facilities. The Mission aims at development of 300 Rurban clusters, which are essentially large parts of rural areas that are not stand-alone settlements but part of a cluster of settlements, in relative proximity of each other. These clusters typically illustrate the potential for growth, have economic drivers and derive locational and competitive advantages. These clusters once developed can be classified as 'Rurban'.

The outcomes envisaged with the mission are:

SPMRM covers 300 clusters, of which 109 are tribal clusters and 191 non-tribal clusters, which are currently under different stages of development across 28 States and 8 Union Territories (UTs). Out of 300 Rurban clusters:

have been developed by States/UTs with a total approved investment of Rs.27,709.33 crore (Critical Gap Fund + Convergence Fund). 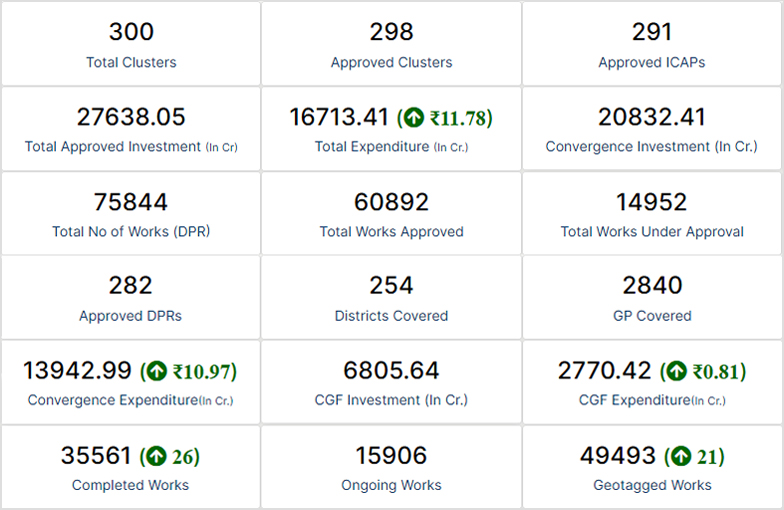